Lady Gaga Suffers from Fibromyalgia. What is it? 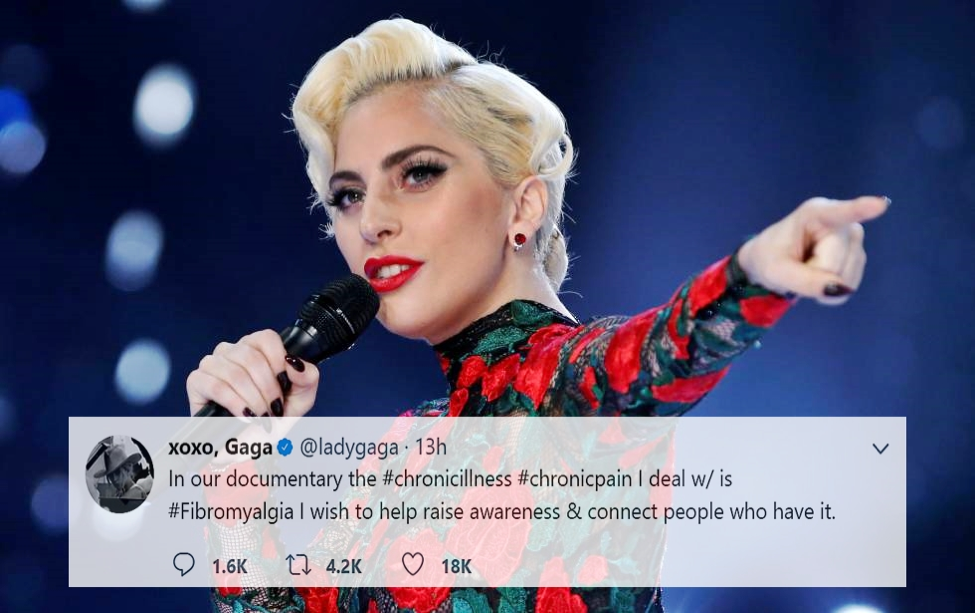 The ever talented Mother Monsters, Lady Gaga, recently went public about her medical diagnosis of fibromyalgia in her Netflix documentary called “Five Foot Two”. In this film she shared her struggles dealing with the condition and how it has infringed upon her career, but also gives thanks to her supportive team and her fans that help her deal with the disease in her everyday life. Since then, other celebrities including Morgan Freeman, Paula Abdul, George Clooney, and Toby Maguire have shown support and empathy for the pop-star, noting that they too suffer from the condition.

Fibromyalgia is a medical condition that affects the musculoskeletal system. It consists of widespread pain throughout muscles and bones. The pain can be quite severe and sometimes even debilitating for the person affected by the condition. The pain often causes sleep disturbances and fatigue, and can affect mood and cognitive abilities, often called “fibro-fog” which makes it difficult to focus or recall memory.

The cause of the disease is not entirely known, however some factors include your sex, genetic history, other pre-existing diagnosis, and past physical or psychological trauma. Women are more likely to be diagnosed with the condition, something that doctors think attributes to the differences in how men and women’s central nervous system reacts to pain. The condition tends to manifest between the ages of 35 and 45. Those who have family members with the condition, due to genetic mutations, are also more likely to develop the condition. While there is no research that shows that other disorders like anxiety and depression cause fibromyalgia, these mood disorders are commonly linked. Interestingly enough, researchers also found that Post-traumatic Stress Disorder (PTSD) caused by physical trauma due to injury or psychological trauma can trigger the onset in those who are already genetically predisposed to fibromyalgia.

There is currently no cure for fibromyalgia, nor is there a “one pill” treatment for the disorder. However, there are a variety of ways to treat the disorder, including lifestyle changes. Fatigue is a common and overarching symptom of the disorder that can be treated with common drugs like antidepressants, as well as aerobic exercises. Reducing fatigue can also help with improving sleep and related mood disturbances. Those that suffer are sometimes hesitant to exercise due to fear that it will increase pain, however exercise,specifically aerobics, can help reduce pain. Doctors will also suggest typical over the counter pain relievers like aspirin, ibuprofen, and naproxen sodium for pain. Other remedies for pain relief include acupuncture, physical therapy, massage therapy, and even cognitive behavior therapy (CBT). Researchers are currently in the process of developing new drug treatments and are looking for people who suffer from the disorder to participate in these clinical trials. If you are interested in taking part in these studies, you can visit the National Fibromyalgia & Chronic Pain Association to find a trial near you.

This disorder is often misdiagnosed and can take an average of up to 5 years for someone suffering from it to be accurately diagnosed. Fibromyalgia affects approximately 4% of the US population, or almost 12 million people. Having an iconic public figure like Lady Gaga, talk about her own struggles with the diagnosis can have a widespread impact on how often the disorder is diagnosed, and how people go about treating it. Recently, the singer tweeted out about her condition saying, “In our documentary the #chronicillness #chronicpain I deal w/ is #Fibromyalgia I wish to help raise awareness & connect people who have it.” Though she is just one of many of millions of people in the country who unfortunately have to deal with this on a daily basis in their lives, shedding a light on the disorder can help popularize the best forms of treatment while we continue to look for a cure.