Infographic: The History of the Affordable Care Act 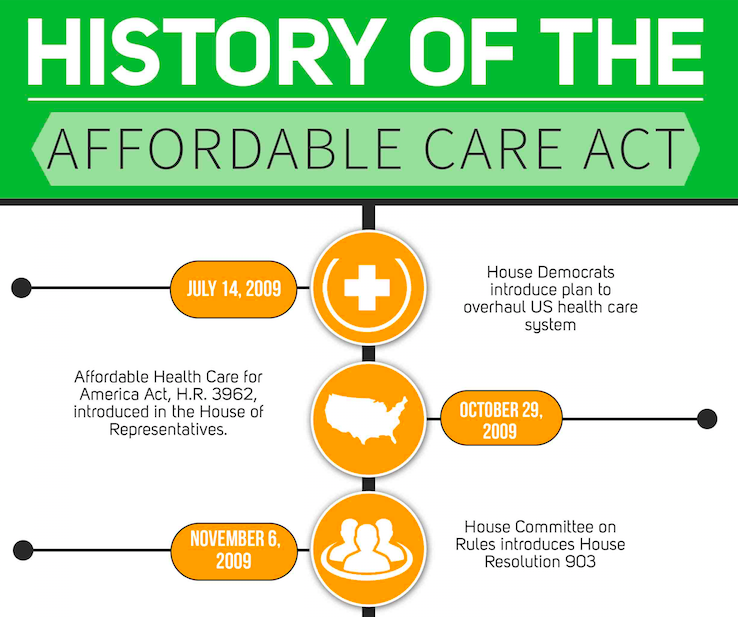 The history of the Affordable Care Act did not come from a smoothly paved road. The bill was met with many roadblocks and staunch opponents. It took years of backroom negotiations, sacrifices, and amendments before it ever became law.

The Affordable Care Act (ACA) officially got its start on July 14, 2009. The House Democrats introduced their plan to overhaul US health care system.

A few months later on October 29, 2009, the Affordable Health Care for America Act, H.R. 3962, was officially introduced to the House of Representatives.

On Christmas eve of that year, the U.S. Senate passed its version of the health care plan.

The following year on March 21st, the Senate bill was amended and OK’ed by House with 219-212. Two days later, President Obama signed the Affordable Care Act into law.

Getting the law passed, a success in itself, was only half the battle. Actually implementing the law would be the next hurdle for the government.

When the Affordable Care Act first went public, it started with less than desirable results. It started with its flagship site, Healthcare.gov, not working properly. This resulted in a meager 27,000 signups in the first 30 days.

But since its terrible beginning, the Affordable Care Act law has demonstrated promise, delivering on two promises; increase the number of Americans with health insurance and drop the cost of health insurance.

To get a better idea of the full-scale behind the Affordable Care Act’s history, we have created an infographic to visualize its journey. Introducing a bill and getting it passed by both the House and the Senate is no easy feat. Neither is implementing the law in different phases. Our infographic breaks down the complex process into an easily understood graphic that will help you appreciate the enormity of the Affordable Care Act.